His Majesty King Abdullah represented Queen Elizabeth II and was the Reviewing Officer at the Royal Military Academy Sandhurst’s Sovereign's Parade on Friday.

Crown Prince Al Hussein, born in 1994 and named as Crown Prince in 2009, enrolled in Sandhurst last year after graduating from the Georgetown University in Washington, DC, where he majored in international history.

His Majesty, escorted by the guard of honour, proceeded to the dais, and Jordan’s national anthem was played.

The King, accompanied by the commandant, then inspected the Parade.

A pipe and drum band representing the Jordan Armed Forces-Arab Army participated in the Parade, playing musical pieces and marches from Jordanian and British military heritage, which marked the first time a non-British military music band participates in the ceremony.

After the Parade concluded, His Majesty delivered remarks to the Senior Division and the Intermediate and Junior Divisions.

“It is not the first time I have had the privilege to attend the Sovereign’s Parade. Many years ago, I was a cadet standing where you are now,” the King said.

“The memories of that day have stayed with me, making it a distinct pleasure to address today’s cadets and Academy staff; their families and friends; and the distinguished guests who joined us,” added His Majesty, who graduated from the Royal Military Academy Sandhurst in 1981.

Addressing the graduates as fellow officers, the King said: “You and your soldiers will have unprecedented resources to hand. Over the course of your careers, technology will advance relentlessly. But remember this first: Nothing, nothing, will substitute for the quality of your command.”

“In the years ahead, your soldiers will look to you for guidance and inspiration. They will want to know that you care for them and for their families. They will model their behaviour on your integrity. They will get their courage from your steadfastness. And these attributes are not reserved for the military, but are equally applicable in public service and business.

“These are huge, and, at times, daunting responsibilities. You must strive to be the best. Understand you will not be alone; your friends in your platoon and companies will be lifelong, because you have learned that working for each other is the way to succeed,” His Majesty told the graduates.

“Some of your most important friendships, forged in the mud and rain of Brecon, will be those with cadets from different countries, different cultures, and religions. Indeed, the enduring bonds that began here can help all of you lead the global understanding that a secure and peaceful future requires,” the King added.

His Majesty also reminded the officers that: “It is just as important to remember the many who helped when things were toughest—friends and family who cheered you on, from the day you arrived here, with your ironing boards. On behalf of Her Majesty, I thank them most sincerely. And I know how important they will be to you, as you go out into this hugely exciting, challenging, and, at times, dangerous career.”

The King then urged the officers to “always act in a way you can be proud of.”

“Not every day will be a good one. You may not win every battle. But, however many times you get knocked down in life, you can, and must, get up again. In this profession of arms, you are now where the buck stops. You are graduating, because people believed in you. You must now believe in yourself and rise to the challenges ahead,” His Majesty said.

Concluding his remarks, the King told the young officers: “However difficult, do what is right. Be confident in what your instructors have taught you. Take strength from your family and faith. And, above all, my fellow officers, never stop Serving to Lead.”

During the ceremony, the King awarded medals to distinguished cadets and a number of instructors and Academy staff.

His Majesty also awarded the Sandhurst Al Hussein Medal to the officer cadet who showed the most significant improvement in performance during the training. The medal is awarded to non-British cadets.

The medal is named after His Majesty the late King Hussein, who enrolled in Sandhurst in 1952.

At the conclusion of the ceremony, the King received the Sandhurst Medal from the Academy’s commandant, and presented the Great Arab Revolt Centennial Medal to the RMA.

Their Majesties also attended a lunch banquet held by the Academy in celebration of the graduates and their parents.

Sandhurst is one of the world’s most prestigious military academies, with some of its departments dating back to over 250 years. It is also the only academy that graduates British Army officers. Cadets from other countries also enrol at the Academy.

The British Sovereign, Queen Elizabeth II, graduates the officers, or invites the leaders of countries with close ties to the United Kingdom to represent her at the Parade.

A number of royal family members have also graduated from Sandhurst. 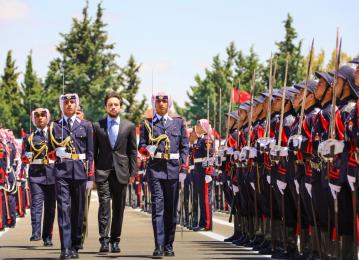